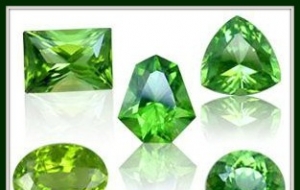 Peridot is said to host magical powers and healing properties to protect against nightmares and to bring the wearer power, influence, and a wonderful year. As peridot is a gemstone that forms deep inside the Earth and brought to the surface by volcanoes, in Hawaii, peridot symbolizes the tears of Pele, the goddess of fire and volcanoes. Today, most of the peridot supply comes from Arizona; other sources are China, Myanmar, and Pakistan. This gemstone comes in several color variations ranging from yellowish green to brown, but most consumers are attracted to the bright lime greens and olive greens. Peridot, in smaller sizes, often is used in beaded necklaces and bracelets.

Sardonyx is a form of onyx and is recognized by its layers of reddish brown and white banding. It was popular with the ancient Greeks and Romans who carried into battle talismans of sardonyx engraved with images of heroes such as Mars or Hercules, believing that this would bring courage and victory. Because of its attractive banding, sardonyx has long been used to fashion cameos (carved raised figures) and intaglios (the reverse of cameos). This gemstone is found throughout the world. The most attractive specimens are found in India, but material also is mined in Czechoslovakia, Brazil, Uruguay, Germany, and in the United States.

Mention this this post and receive 25% off your next Peridot purchase. Exp:8-31-2015
*See store for details – exclusions may apply.